Belvès in the Dordogne is top search hotspot in France

As featured in The Telegraph: 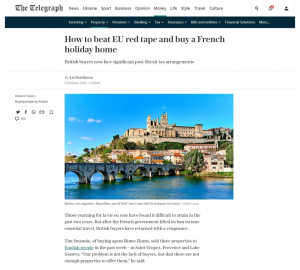 New data from the UK’s biggest overseas property website Rightmove reveals that Belvès in the Dordogne was the search hotspot in France for British buyers last year.

Searches for the idyllic village of Belvès more than doubled (+133%) compared to the previous year.

Chaillac in the Indre department in central France was second (+111%) and Parisot in Tarn-et-Garonne in Southern France was third (+49%).

The Dordogne was the most popular search location in France for British buyers overall, followed by Brittany and Normandy.

Rightmove’s Overseas Insights Expert Rachel Beaton said: “At the start of the year, many British buyers will be considering their plans for the year and the move they could make overseas. It appears the trend of considering an idyllic life in a village that we’ve seen in location searches around the UK over the last year, has also been taken to searches in France, as Belvès in the Dordogne tops the list of hotspots from British buyers. With travel restrictions shaping up to be far less than we’ve experienced over the last two years, many British buyers will be thinking that this year is their time to take action.”

Joanna Leggett, Marketing Director at Leggett Immobilier comments: “Since the travel ban was lifted, there has been a huge surge in UK buyers across the country. Probably the most surprising thing is that the majority are looking to move here full time (rather than buying a holiday home). It’s clear that whilst Brexit may have added a little red tape the British love affair with France lives on.

The most common brief from UK buyers is that they are looking for country property, that is well located and has plenty of outside space. Above all, it must have good broadband (preferably fibre) and a room that can be used as a home office. Work from home (and yes, even “work from holiday home”) is a reality, not a fad, and comes up frequently.

In terms of location the highest demand from the UK is in areas easy to access. That means Brittany, Normandy and the Loire Valley if coming by car, or towns close to the smaller airports if flying. That means that property close to places like La Rochelle, Poitiers, Limoges, Bergerac, Carcassonne and other regional airports.

For those looking at investment property then the Alps, PACA and Paris remain the most popular destinations, although prices are rising higher in the countryside than in cities.”

Tim Swannie, Director at Home Hunts, said: “For us, enquiries from Brits so far this year are up quite substantially in most areas compared to last year. We are putting this partly down to travel restrictions being lifted. Our British clients were quite frustrated for much of last year because the market was extremely busy in France and they were watching properties regularly sell, but travel into Europe was difficult due to restrictions they faced as a Non-EU member.

“The Brits are really making up for that this year so far, the most popular locations for us are the French Riviera, particularly Cannes, Saint Tropez and the villages such as Mougins and Valbonne, also the area between Nice and Monaco is very popular, such as Villefranche sur Mer and Saint Jean Cap Ferrat.

“The biggest issue currently is the lack of properties in the popular areas, there are more homes coming on to the market as we come into spring, but there is a huge demand currently. Serious buyers who have been watching the market over this past year or so realise how quickly properties are selling, so we have found that people are being more decisive and not taking as long to decide as they would have done a couple of years ago.

“2021 was the best year we have had, we helped a record number of clients to find their dream homes. This year has started even better now that we have got a lot of our British clients back.”

Most searched for areas in France:

Areas of France with biggest increase in searches 2021 vs 2020

You’ll find all the latest insights and updates on the Rightmove Overseas Hub: