New data reveals the most popular local neighbourhoods for buyers signing up to find out first about properties coming up for sale in the current frenzied market. The new dataset, which is the earliest indicator of buyer demand in a local area, is based on over 2.7 million home-hunters who are signed up to receive instant property alerts for properties coming to market.

Top of the list of local neighbourhoods is Didsbury in Greater Manchester which is one of the most expensive areas within the county. The average asking price in Didsbury currently stands at £367,429, over £130,000 higher than the Greater Manchester average of £237,380.

Second on the list is Walthamstow in East London, where average asking prices have risen by 116% over the past ten years, rising from £230,888 to £499,534, and they are up by 4% over the past year. The only other London location in the top ten is Chiswick, which is the only place on the list where asking prices are lower than this time last year, down by 1% to £969,350, and down by 9% when compared with five years ago when they were above £1 million.

The top ten most sought after locations for buyers across Great Britain are: 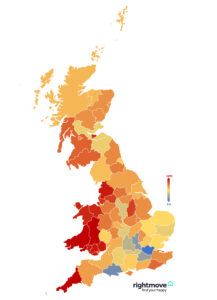 Rightmove’s property expert Tim Bannister says: “Our new analysis gives sellers in these local hotspots a clear indication of just how popular their area is, as it tracks the huge pool of the most eager prospective buyers who are signed up to find out instantly when a seller decides to bring their property to market. More buyers have realised they don’t have the luxury of waiting until the weekend to decide which properties they want to request to view, and so they’re making sure they’ve signed up to find out first when a home comes up for sale. We’re hearing reports of some areas where properties are selling within a few days of being added to Rightmove, and the average time to find a buyer is the quickest we’ve ever recorded nationally. But we also know there are thousands of local markets and some are moving more slowly than others, so as a seller you’ll want your property being seen by the biggest group of buyers possible, giving it the best chance of selling and achieving the best price.”

Rob Kennedy, Managing Director of Philip James Kennedy in Didsbury Village said: “The marketplace during 2021 has seen a surge in the Didsbury property market with record levels of sales and many properties generating multiple bids. House prices have increased as a result and properties are selling and completing faster. During these unprecedented times the importance of ‘home’ has increased with many buyers wanting more space working from home; more space to relax and exercise, and many buyers wanting more outside space, easy access to a local park or larger garden. Built within the backdrop of wealthy merchant mansion homes and exclusive conservation areas, Didsbury offers a wide variety of exclusive properties with early Victorian cottages; late Victorian terraces and traditional semi’s through to ‘Arts and Crafts’ detached family homes and futuristic apartment and townhouse developments. Fashionable West Didsbury village consists of predominantly late Victorian terrace properties arranged around irrepressible Burton Road within family sized villas, mansion terraces, and sought after modern and converted luxury apartment developments. Both villages are geographically small but have beautiful parks, outstanding educational establishments, specialist food shops, a well-established café culture, upmarket bars and award winning restaurants.”