New analysis by Rightmove shows that homes further out on London commuter lines are seeing the biggest jump in the number of buyers looking for their next home, a complete reversal compared to this time last year.

The majority of zones have swapped demand rankings compared to the previous year, and as you move out by zone the jump in the number of buyers increases further:

The two stations that saw the biggest increase in the number of buyers were High Barnet, up 166%, followed by a station just a few stops along, Finchley Central.  Northern locations of the northern line are performing more strongly than the southern locations, and there is a clear dip in demand along the zone 1 stations. 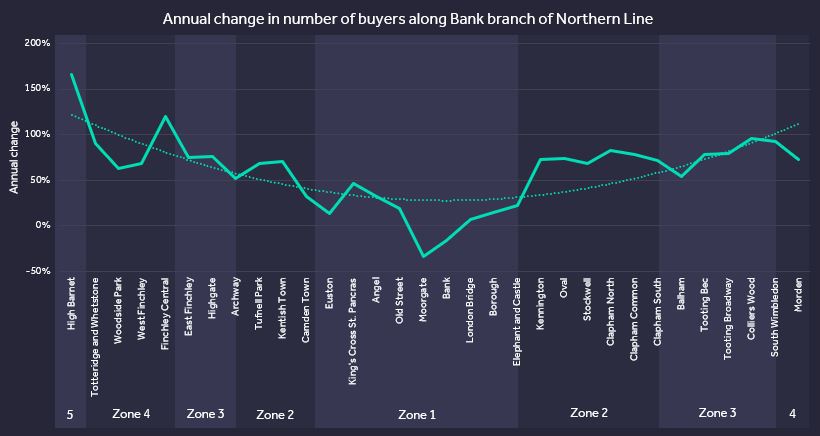 Rightmove’s Head of Property Data Tim Bannister comments: “Agents have been reporting a number of people selling up in the inner London zones and moving further out, but to see this reversal in the demand trend reflected so clearly in the data is quite something. Some buyers still expecting to commute into the centre in the long term may have now adjusted their mindset about how many zones they’re prepared to move out, leading to zone 6 being the new favourite. This data demonstrates the short term trend of more central places like Moorgate and Bank seeing lower demand right now – although it’s worth noting that it’s off strong demand levels for these locations a year ago. I do think this demand will come back eventually but it’s not clear yet how long it will take.”

Save time with integrated referencing

How to make the best use of your Rightmove reports

How to make the best use of your Rightmove reports